I'm looking at a time period in SQL Monitor where the main CPU metric at the top is pegged at 100%: 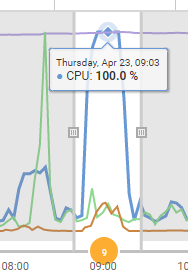 I then looked down at the CPU area below and see that the machine CPU seems to be much higher than "SQL Server":

Then, I looked at the process info by CPU and see:

This is confusing for me.  Might someone be able to shed light on why "SQL Server" % is ~8% max above, but sqlservr process is ~98%?  And, how might I go about finding what is really causing the pegged CPU (within SQL Monitor)?